...and the fact that I actually spent $5 on a really cool collage app for my computer...

....AND the fact that I am the worst slug in the world when it comes to ever doing anything with my pictures other than uploading them to my computer....

...I actually did a super awesome picture thing recently.  And I think there may be more of it in my future.  Actually, I know there will be because I've already made two others, and am currently working on a fourth project, and GOSH DARN I will get my $5 worth out of that app.

Oh, and when I say I'm a terrible slug dealing with pictures, I mean it.  Like I almost have a fear of doing anything other than pulling up a file on my computer and looking at them again.  I've never scrap booked; made a couple failed attempts at keeping just a photo album of prints; lost many a hard copies I've been given; rarely printed off digital pics I've taken; have no baby book for my son; no wedding album of me and the hubs; no pictures on my walls except what I've been given (and my husband has hung), and pretty much an immortal fear of all picture projects.  See, told you.

So anyway I thought I'd share with you what is, I think, the first thing I have ever done with pictures.  Okay I take that back.  When I was post partum with a screaming Charlie who wouldn't nurse, and wouldn't sleep and cried all the time, and forced me to stay constantly attached to a pump, I appeased my husband by making one photo book of Charlie, which was also mostly a desperate attempt to do anything that didn't have to do with holding my baby.

This is a good sign folks.  Maybe at least one of my children will actually get some sort of baby book.

Or maybe I'll at least get some pictures on my walls. 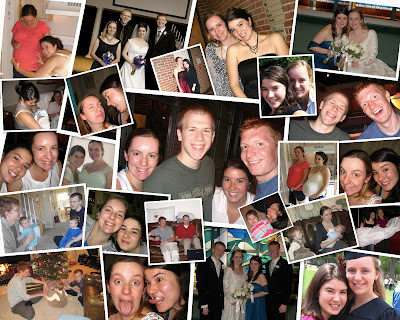 10 years of knowing our good buddies, the Hodges.  :-D

It's been a good decade guys.  Here's to 10 more decades.


There was no blood, sweat or tears in the making of this photo.  Okay, a bit of sweat, but I was making this during the 100 degree days, and in spite of the thermostat claiming it was 77, I claim otherwise.