Everyone has a birth story...

that doesn't even factor in me trying to get on my feet enough to take care of the other two people in my house.  Good thing my husband is patient with me and good thing our first son doesn't mind being neglected and left to playing on the ipad and watching movies.  Guh.  This too shall pass.  This too shall pass.

I read several other mom bloggers and I marvel at the fact that they have CONTENT.  Within DAYS of having their baby.  OR TWINS.  Or within HOURS even.  I'm sure they see some sort of monetary compensation for their blogging and therefore have more motivation.  But still.

After going a week early with Charlie and have a nice healthy pregnancy this go around, I for some reason, almost knew deep down in my heart or maybe that was deep down in my excruciating lower back pain that surely I would go early (oh 37 weeks or 38 weeks maybe) and just have this pregnancy done.

Week 40.  Monday afternoon the day before my due date.  I got it into my head to experiment with pumpkin cookie muffins.  I rarely bake anymore but I guess it was one last bit of nesting trying to eke its way out.  I only bring that up because I remember so vividly the fact that even while having my first painful braxton hicks contractions, I was so ridiculously determined to make these cookies that I perused the internet for multiple pumpkin cookie recipes, tore them apart and constructed one of my own from the shards of ideas laying around my kitchen.  And darn were they good.

So Monday afternoon was baking.  Erratic contractions, sometimes painful, sometimes not.  Oh and texting Nicole to find out whether Lindsey had her baby yet.  What's that you say?  Who are those people?  I'll get to that.

Monday afternoon was me texting my husband telling him I didn't think I could do dinner.  I really didn't know, but gosh I wanted an excuse not to cook and to eat out.  More erratic contractions, sometimes painful, sometimes not.  More texting Nicole to find out about Lindsey - should be anytime now.

Monday evening was William bringing home Pei Wei and me eating a dish that was too spicy - but hey, maybe it will bring on more contractions.  More erratic contractions, sometimes painful, every now and then I had to stop and breathe through them.  Nicole:  Lindsey is still in labor.

Monday late evening was the 3 of us going on a walk down our road hoping to kickstart these THINGS THAT CAN'T MAKE UP THEIR MIND into real labor.  More erratic contractions, but less  all around.  Still texting Nicole to find out about Lindsey.  Should be anytime now.  Oh wait, she's already said that multiple times.

9pm was me giving up and deciding to go to bed since the contractions really were so erratic and not getting stronger or closer together.  Disappointment guys.  I'm sure there was more texting to Nicole around this time to ask about Lindsey.

10pm found me awake in bed, unable to go to sleep because just as I was nodding off to sleep a contraction would hit that I could NOT sleep through.  And here's where the time and events get a bit fuzzy.  Oh wait, Lindsey finally had her baby!!!  Now I just need mine.

I'm lying in bed, still pretty much in denial that this is happening because after witnessing my sister's last birth where that child toyed around with her for days and days, AND since I had been so lucky my first go around to not have any false starts, I figured I was due for a false start this time.  But lying in bed trying to sleep and 20 minutes pass and you are just about to fall asleep when BAM contraction hits just turns you into a grumps.  Eventually they got painful enough that William said I had to call the birth center.  So I called.  I knew what they were going to say.

I hate getting in the tub.  How people think it's comfortable to lay in a hard tub while 9 months pregnant is beyond me.  But get in the tub I did.  They said the warm water would either slow the contractions or make them more regular.  Growl.

So me and the sore back got in the tub and we timed contractions and William kept saying they are getting closer you should call them back.  And I kept saying, no I don't think they are regular enough for them to tell me to come in, and it went back and forth like that till finally I relented because indeed they had not died down in an hours time (even though they really still weren't GET IN THE CAR yet).

I love my midwives.  I love the birth center.  But I remember in that moment being dumbfounded at the recommended advice: try and go back to bed and get some sleep since it didn't seem quite time to go in yet.  I'm sorry, if I could have been in bed sleeping I would have.  I would not have been lying in a hard tub, with a sore back and belly great and unwieldy if I had been able to sleep.  I told her that kindly in between breathing through my contractions and she relented and said "well, since you can't sleep you might as well come in and let us check you so that at least we know where things stand down there."

Okay.  Good.  We can probably be there in about an hour.

Friends, I think it took us about an hour just to get out of the house and in that hour BAM!  It was labor time.  By the time William's mom got here to stay with Charlie, I couldn't walk by myself, I couldn't talk and I was shaking all over.

To those who have never been in labor before - that's called transition.  That thing you do where the pain is at it's worst and you are like right on the edge of getting to push.  We later found out from his mother that the moment she saw me, she kept trying to urgently get us out the door faster than we were moving.  She knew.  Mothers always know.

Let me just say that a 40 minute drive across I-40 in the middle of the night while transitioning is something I NEVER WANT TO REPEAT!!  Ever.  Ever.

I have vague memories of calling my sister and telling her to meet us at the birth center.  I remember through clenched teeth telling William that while I do not generally support speeding, that if he kindly would speed I would appreciate it.  And him kindly telling me that it was dark and wet and rainy out that night and he had a pregnant wife unbuckled in the backseat of his car and no he was not going to speed.  Blargh!  I have memories of not being able to get out of the car until I had William and the midwife to lean on.  And memories of losing a sandal and asking for it to be put back on and them both saying they thought it would probably be okay if I left it there and just walked barefoot the 10 steps to get inside.  Are you serious guys?!  I have memories of getting in there, getting checked and having a fear of them telling me I was only 4cm dilated (like I was with Charlie when I checked in at the birth center) and then having to sit there and labor like that for another LONG time.  Oh please no.

Then it's kind of like a lightening flash.  3am.  BAM!  I was 8cm dilated.  BAM!  2 contractions after arriving I yelled out to the midwife that I couldn't NOT push.  BAM!  Pushing commences because it can't not.  BAM!  40 or so minutes after we pulled into the parking lot, my sister rushes in through the door, grabs my leg and... 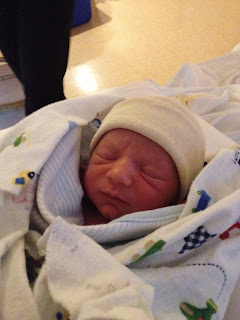 2 minutes later we have a baby.

Yea one more red light and you'd have missed it Carrie.

40 minutes at the birth center and I was done.  I couldn't believe my good luck.  After laboring for 24 hours with Charlie, a majority of them spent at the birth center, I was in and done in 40 minutes here. Not that labor was 40 minutes total mind you, but it felt and was much shorter since most of it happened at home.

So Ian Maxwell decided he'd come promptly on his due date - not a day early and not a day late. :-)  And that my friends is the story of little Max.  Little Ian.  Ian Max.  Imax.  Yea people call him all sorts of things.

Okay so last part here.  Who are Nicole and Lindsey and why do they get mentioned in Ian's birth story?  Well, Lindsey is William's cousin who was due about 10 days before me and she and her husband Josh were also birth center peeps!  Yay!  Nicole is another cousin that I was constantly plaguing for updates so that I wasn't constantly bothering the daddy on L&D duty.  Once I knew Lindsey had the baby so late Monday and once it became clear that we were headed to the birth center in the wee hours of Tuesday, I figured our paths would cross.  So would you believe in the middle of contractions and pushing, through gritted teeth I was asking the midwives if Josh and Lindsey were still next door.  Yea that was all sorts of puzzled crazy looks I got.  It took me another contraction and the explanation that they were my husband's cousins before the midwives took their bizarre look of "Is she crazy?" off their faces.  Yea not crazy.  Well sort of.  I think they thought it was awesome actually.

So the second cousins, Ian and Ever, were born 5 hours apart at the same place, and the following morning before leaving we all had a party!  Not really.  But it felt like a party getting to see familiar faces who had just gone through the exact same thing we did.

Congrats Ian and Ever on your awesome timing!

Posted by Baughface at 9:58 AM No comments: Links to this post