It's nice during pregnancy to have moments where you feel like you are rockin' the cute vibes.  I know those moments get fewer and farther between the bigger you get, so I'm enjoying them while they last.  And I do feel cute in this picture.  The pigtails really throw it over the edge.  Promise I'm not doing that on purpose.  My hair is just at a really weird length where the only way it looks good is pulled back and away and out of site.  And pigtails are easier than a ponytail.  So there.
Week 13 has been treating me much nicer than previous weeks.  I'm feeling good and trying to savor these early pregnancy moments before things get uncomfortable.  I'm also enjoying the fact that while I don't love running around right now and chasing my son, I can still totally do it.  One day he'll take off, and I'm just not sure how fast Mama will be able to follow.
Also with the dizziness almost entirely gone, I feel better about getting back into my exercising.  Between sickness and pregnancy, my entire workout routine got thrown to the wind.  But I'm slowly getting back into the groove.

I'm also feeling the urgency to get stuff done in the house.  With Hubby finally finishing up his PhD and getting a job, we have a list of things we'd like to do/overhaul/get rid of/organize in the house before baby comes, and I ALREADY feel the days ticking by way too fast.  Someone slow them down and let me get my house in order!!

Love you, baby.  (Whom Daddy is already convinced is a little girl, but Mama is not so sure about.)
Posted by Baughface at 1:28 PM No comments:

So I realize the first post I did was lies, all lies.  I was not 10 weeks.  I was 11.  You'd think I'd have that straight, but it's amazing what you do (or don't do...or remember) the second time around.  So this was supposed to have been posted last Tuesday (as in a week and a half ago).  I'm late.  But better late than never is my motto, since I didn't even have a camera during half of my first pregnancy due to an unfortunately windy day at the beach.  Sand, wind, you do the math.
Week 12 is not my favorite picture, but that's okay because week 11 was awesome and I'm rockin' some cute pig tails in week 13, which will be posted shortly as well.

Weeks 10-12 have been really bizarre, including extreme fatigue, dizziness, weird tummy aches, light headedness and bizarre hearing issues.  But thankfully week 13 has perked up and is doing much better.  Snacking on plenty of sunflower seeds, pumpkin seeds, spinach and lentils to make sure my iron levels stay okay.  They were a smidge low when I was feeling so badly.  But with the increased iron rich foods, I seem to be feeling much better.

Posted by Baughface at 1:22 PM No comments:

A while ago, amidst my pregnancy tiredness and sickness, I received this in the mail. 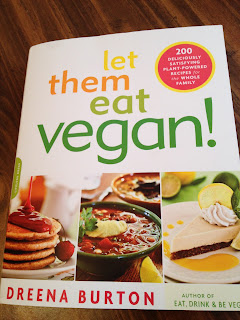 Oh yea baby, yours truly received a copy of the amazing Dreena Burton's latest cook book Let Them Eat Vegan to review. I already own a copy of her Eat, Drink and Be Vegan and Vive le Vegan! and love them both.  So I was very excited to check out this new one.  And it was mine all mine to cook up tasty vegan treats from and review.  That was a good day.  However that good day has been surrounded by lots of bad, sick, tired pregnancy days.  And so the little book has sat on the shelf while PB&Js, green smoothies and oatmeal were dished out.  Lame-O.
Finally tonight I had the chance to make my first (of many) recipes.  And...drum roll please...I chose the French Lentil Soup with Smoked Paprika.
Why did I choose that on a warmish night?  A.  It looked super simple.  B. I had all the ingredients on hand.  C. It uses two of my favorite things, smoked paprika and lentils (french no less!).  D. I'm notorious for fixing soups on warm nights anyways.  Yes is makes things doubly warm, but I'll be danged if soups aren't one of the the EASIEST things to throw together when you don't have time.  Chop, toss, and simmer.   And this soup was no different.  So.  Easy.
So the soup got made.  The picture was forgotten until hubby came home later and was eating his bowl.  Thus the terrible picture of the soup.  But it was the best I could get, and it is perked up dramatically by my two men smiling. :-) 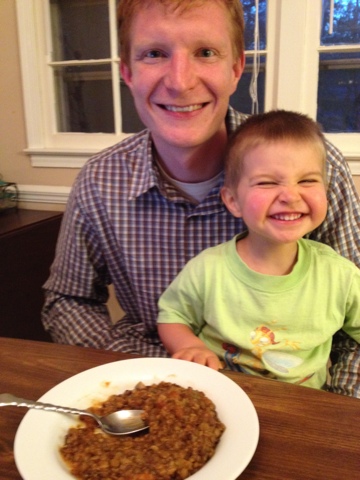 The soup itself is SUPER yummy, although I knew it would be as soon as I read 'smoked paprika' in the title. I'm not a smoked paprika addict or anything.  The smokiness from the paprika, the earthiness from the thyme and lentils really give this soup an inviting flavor.  Paired with a crusty whole wheat bread or some croutons and you'd really be dining in fine style.  Lentil soups are so hearty and filling and this one is no different.  Not to mention chock full of protein, fiber, folate, iron and a whole HOST of other vitamins and nutrients.  Note the iron and the folate mention, since I'm preggo and my midwife has been emphasizing them to me.
The soup looks very thick in the photo, and that's because I used a little less water than what was called for (hey we like our soups thick), and I tossed in a cubed potato so that it would be seasoned nicely and Charlie could practice chewing a new texture for therapy.  Worked out great.   Oh, I also didn't have any straight french lentils on hand, so I threw in a lentil blend mixture that I had.  While I love the firmer texture of the French Lentils, the mix of varieties worked just fine too since it contained French and Beluga, which are a bit firmer, and then varieties like red and ivory which almost melt into nothingness.  It was all good.
So back to the cook book, which I'll hopefully talk a little bit more about later... you want to know some of the recipes catching my eye? ;-)
Proper Healthy Granola Bars
Cocoa Cookie Dough Balls
Smoky Sweet Potato and Black Bean Salad
Creamy Curried Almond Dressing
Smoky Spiked Tahini Sauce
Chipotle Avocado Cream
Truffled Cashew Cheese
Mac-oh-geez!
That's just a sampling of the goodness I want to try.  And I won't even go into the list of desserts that I want to make.  We'll see how much this baby cooperates and how much energy I get back in my second trimester. Fingers crossed folks - almost there.
In the mean time.  It was a awesome soup.  Dreena strikes again with her delicious eats.  :-D
Posted by Baughface at 9:40 PM No comments:

Yay!  Finally another recipe posted!
This is one of our favorites.  Well, it didn't used to be my favorite.  Growing up my mother made this, and I would cringe anytime I was forced into a bite.  Amazing how our tastes change, isn't it?
I really couldn't even tell you what prompted me to make this when we were first married, or when I discovered that my hatred of it turned to love.  But to love it did turn, and for a large chunk of our pre-child life, I would make this every Saturday for lunch.  Oh.  Good.
Tabouli or Tabbouleh is an Arabic salad, which apparently has some variation to it, depending on whose hands it ends up in.  Lebanese go heavier on the parsley than the bulgar, and this version is generally more parsley heavy than most versions I see of it in stores or restaurants, so I'm gonna go with this is a Lebanese version of tabouli.
Once you get the parsley washed and picked, this salad is also painfully easy to make.  Actually depending on your parsley pick method, it can still be painfully easy including the parsley.  Pre-children I meticulously picked each leaf from the stems.  Post-children I am not so careful. :-) 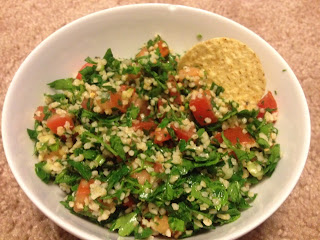 Lebanese Tabouli Salad
2 bunches Italian flat leaf parsley
2 large tomatoes (or 3 medium ones)
2-3 green onions (I almost never do more than 2)
pinch of salt
3/4c bulgar wheat
1-2 Tbsp olive oil
1/4-1/2c lemon juice
water if needed
Night before (or at least 3 hours before) soak your bulgar in the lemon juice, olive oil and water mixture.  Really I don't even measure the liquids anymore, I just make sure it sufficiently covers the bulgar plus a little more.  The bulgar will soak up the liquid and then no cooking is needed.  When soaking, store in fridge.
Wash parsley and pick leaves from stems.  Depending on how much stem you like or can tolerate in your salad, you would either carefully pick the leaves from the stems, or do a general ripping of the leaves from the whole bunch, getting both stem and leafy bits.  Up to you.
Finely chop parsley and dump into bowl.  Dice tomato and dump into bowl.  Chop onions and dump into bowl.  Add soaked bulgar mixture and stir.  Season with a little salt.  Bam!  Easy peasy.
Truthfully this is best served with chips.  Best tasting that is.  If you are being good and healthy and smart (sometimes I am....and sometimes I'm just not) you eat it by the spoonful and it's still absolutely delicious.  If you are throwing caution to the wind, it is amazing on chips.  :-)
Aside from being seriously high in Vit. A, C and K, when you are talking about a cups worth of parsley (which you are if you are eating tabouli), it actually has a nice chunk of folate and iron.  Bonus! 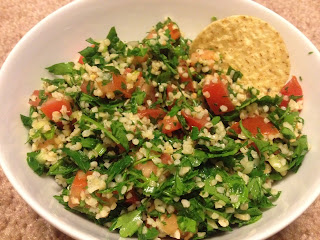 Seriously yum folks.  I kind of wish I had it on my menu for tomorrow now.
Blast!
Posted by Baughface at 8:57 PM No comments:

At least that's what Daddy calls it.  I thought given my propensity towards the legume family we'd call this one 'Bean'.  But Daddy stubbornly sticks with 'Nubbin' and so maybe the next one will be 'Bean'.
We're all super happy!  And super grateful for the little heartbeat we heard today.  :-)
Posted by Baughface at 5:36 PM No comments: