And it continues to grow

I've pretty much almost completely officially decided to probably just let my hair grow out again.  Ha!  I've been mulling it over for a while now, usually waffling back and forth between keeping it short short over the summer and just letting it grow.  With such a short and styled initial hair cut, I quickly discovered what it's like to be a guy and "need" a hair cut every 4 weeks.  It was amazing how fast the cute short pixie morphed into something I liked much less, just because it had grown, what - A 1/4 INCH IN FOUR WEEKS?  I never understood that ritualistic monthly male hair cut phenomenon until now.

Anyways, after the first 3 weeks or so, it started being decidedly something I didn't want, so it threw me into the quandary of deciding between continual cutting or growing.  Given that I don't have a job that demands a chic, nicely trimmed 'do all the time, nor do we have an income right now to support $40 cuts every 4 weeks, much as it would have been fun to maintain the short hair for a while, I think it's just going to have to grow.  I mean I cut it for LL anyways, not specifically because I wanted to start permanently having a short 'do, so why not let it start growing again.  And I'm so much not a fan of the way my hair looks in this 6-12 weeks hair cut range, that I really don't want to keep getting short cuts every 3 months to stretch out the money, only to love my hair for 3 weeks and then desperately wish for a cut for the next 2 months. So I've been trying all sorts of different styles as the hair grows through it's awkward phases.  This is the latest one, which I have to say I'm kind of enjoying simply because you can see some of my forehead!!   I have missed seeing my dear forehead and eyebrows for the last two months! 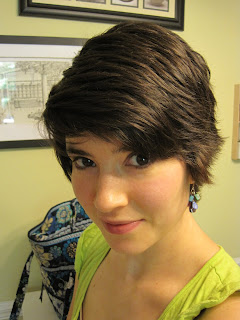 But for the record, if it was in the budget, I would definitely keep the short monthly pixie cuts through the summer at least - I liked the hair cut that much. :)


(Ha!  Joke's on me.  I looked on my calendar and it actually hasn't even been quite 6 weeks since the initial cut yet, so I can't even imagine trying to stretch out to a cut every 12 weeks to save money.  I was ready for a trim at 3 weeks for sure.  Mind boggling how short hair cuts are so particular!)
Posted by Baughface at 9:00 AM

Email ThisBlogThis!Share to TwitterShare to FacebookShare to Pinterest
Labels: my life, pictures