What a little desire will get you

Charlie is working on responding obediently to commands.  We have a long way to go, but "pick up that toy" or "please get your sandals" or "can you close the door" are more readily happening, if somewhat reluctant sometimes.

So today while I was ironing in the den and he was playing with his special drawer of den toys, he remembered...the big box.  The Big. Box. of. Wonderfulness.  At least that's what I imagine goes through his head.  In all actuality it's a box full of very very thick cardboard tubes (like wrapping paper tubes), cut in size and at least partially covered in decorative contact paper, that are great for stacking and various other fun things.  Oh here, I'll show you.


It's a family thing.  I remember playing with them as a kid.  They're awesome.  We just recently pulled them out for Charlie and I guess he thought they were the bee's knees as well.

Anyways, he remembered them sitting there nicely in the box on the hearth and started going crazy and pointing at the box and grunting and pretty much anything he could think of to illustrate how much he wanted these tubes out.  So what did I do?  What any good mother would do.

"Pick up your toys and put them back in the drawer, then I will get out the tubes."

I have never in my life seen that child obey a command so quickly and so completely as he did right then.  He got right busy hastily dumping toys into the drawer.  But he made sure that they were definitely in the drawer and not falling out again or half in and half out.  It was amazing.  He like ran around the room gathering toys like crazy.  When he put the last toy in, he couldn't quite get the drawer closed cause he had one little toy preventing it from shutting all the way.   I could see he was getting panicked and frustrated, so I asked if he needed help.

hehehehe.  I am still chuckling over that one.

I helped him close the drawer and bam!  he was up and pointing and grunting at the Big. Box. of. Wonderfulness.  So after I made him say "please mama box"...

One word at a time of course since he can't remember multiple words strung together.

...I got him his much deserved prize.  I was so proud of his hard work and commitment to getting the job done when something he REALLY WANTED was on the line.

Now, how do I get him to approach toy picking up and emptying silverware with that much enthusiasm? 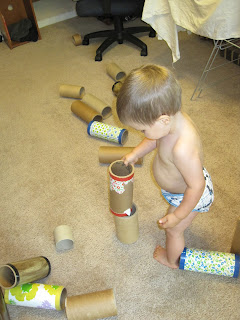 Posted by Baughface at 9:44 PM

Email ThisBlogThis!Share to TwitterShare to FacebookShare to Pinterest
Labels: Charlie, my life