My poor son has a black eye. 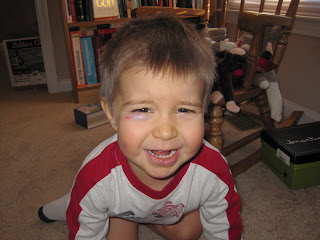 He's had one all day.  Since yesterday evening in fact. I didn't want to take him out this morning for errands, but we did anyway.  In spite of my reassuring all of my friends when they have had to take their bumped and bruised children out in public, that everyone knows that little kids fall down and get hurt all the time and therefore are not automatically going to assume abuse, I was in fact, hesitant to do it myself.  Maybe it was just the black eye thing.  I think that looks worse than a bruised leg, but maybe that's just me.


But run errands we did.  The cleaners, Walmart and the grocery store.

We made it back alive with no question of abuse and no one running up to me and grabbing my child to turn them over to social services.  Whew!


Then began our whiny day.  It escalated after nap time when Charlie was repeating over and over again "heiny owie, heiny owie" with an occasional "eye owie" thrown in there, which I admit I was ignoring due to the fact this his heiny was actually in pretty pristine condition, with no sign of rash or owie anywhere.

Then daddy came home, saw the poor little shiner on Sonny, heard about the whiny day and said "do you have any baby tylenol?  Have you given him anything?  His eye probably really hurts."

I grew up taking very little medication, and really getting hurt very little.  I guess we'll chock that one up to being a girl.  So why would I ever possibly consider the fact that my son's black eye was actually causing him pain?  Smacks forehead.  I was even at the grocery store and walmart where I could have easily picked something up.  Smacks forehead.


It took Daddy.  Now I'm sitting here feeling terribly guilty as a mother (especially after the ear nicking incident during last weekend's hair cuts), and the only reason I even have time to blog is because Daddy took his little boy out to Kroger to get some baby tylenol.  :-(

Oh yea, how did he get the black eye?  Apparently diving under the piano bench is only fun as long as you manage to actually dive under it, instead of diving into it.  Ouch! 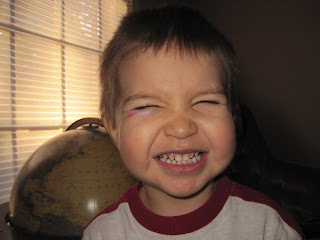 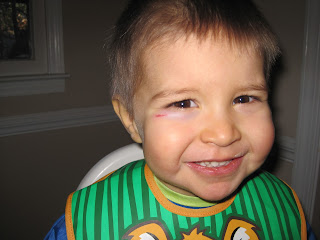 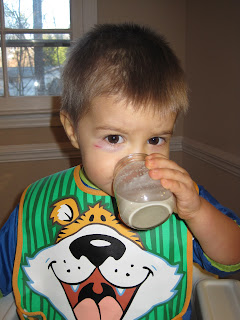 It looks lighter in the pictures than it actually is in person.  Poor little Bubby.  There will be snuggles tonight.  Though whether it will be more for the comfort of my child, or to assuage my mommy guilt, who knows....

Posted by Baughface at 6:58 PM