16 weeks saw the return of more energy and God's abundant grace.  (Not that God's grace was lacking before, but it was very clear this past week.) We've been doing a lot of "home improvement" things in the house now that William is home in the evenings, we have a paycheck again, and it's long overdue stuff that desperately needs to be done before the baby comes. And amazingly enough, I keep plugging away at it day after day and I haven't crashed yet. Even with some heavier lifting that truthfully my midwife would probably scowl at, I've managed to avoid a bad, exhausted, lay on the couch kind of day.  Which is really cool given my week 15 saw 2 of those days.  Today was the exception I mentioned in my last post about waking up great, and wanting to go to bed by 10am. 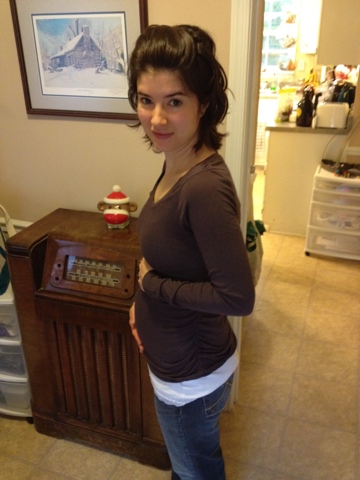 I've given up trying to decide if I actually look bigger each week.  Some days I feel huge and some days not.  Some days I look big and some days not.  (Big being relative at this point people.)  And some weeks I swear I look smaller than weeks before, but who really knows....
I keep waiting and hoping to feel the baby move soon, but no such luck.  Of course maybe that's cause I actually forget to pay attention at night when it's likely to happen, and at this stage, I think you still have to pay close attention to feel any movements.  So far any movement is just me gurgling around in there. :-P
Mama loves you baby.  :-)
Posted by Baughface at 10:16 PM