After my last abbreviated and somewhat scatter brained post, I thought I'd update the situation a bit and share some fantastic pictures.  This post was intended to go out about 2 weeks ago, but what can I say?  Life happened.  Christmas happened.  And mostly, being a mother day in and day out happened.  And so the post did not happen.

Long story short, Microsoft in Seattle offered William a job - a good job - one that wasn't easy to immediately turn down.  We were unsure (on many levels), and they decided to fly us out there to try and convince us!  It was amazingly fast turn around.  He interviewed 2 Fridays ago with them, they offered him a job, and then the following Friday plane tickets were booked for us to head out 2 days later (last Sunday) for a 4 day trip to Seattle (4 days including a bunch of plane time in there unfortunately).  All of the timeline here is about 2 weeks late now, since this post has sat in my drafts box for about that long.

For those that don't know, Seattle is much more friendly to those who have certain allergies and food preferences.  Specifically dairy allergies like I have!  There were lots more vegan friendly places to eat and I found myself surrounded by tasties at every corner almost.  So without giving you a blow by blow of the weekend, here are some high lights of the yummy food consumed and other various and sundry shots from our whirlwind, stressful, romantic, weekend in Seattle with my husband.

First stop, 5 Graces!  This was by far my favorite meal of the trip.  We have some friends (long time family friends of the Coxes) who are in Seattle, and they recommended this place to us.  They had several yummy options to choose from, but I settled on the Raw Tacos "Rawcos" and I was blown away by the tastiness. 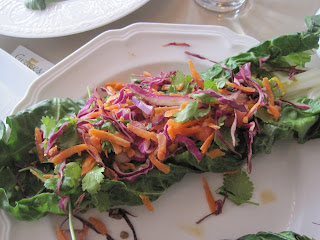 It's hard to see exactly what is going on in that picture, but it's a huge collard leaf filled with a walnut pate kind of thing, avocado, tomato, mango (I think), cilantro, and a yummy slaw on top.  Truthfully I wasn't sure how my first all raw, gourmet meal was going to be.  IT. WAS. AMAZING.  William admitted it was better than his meat and pasta dish. :-)  There were two of those huge things, and I blew right through both! 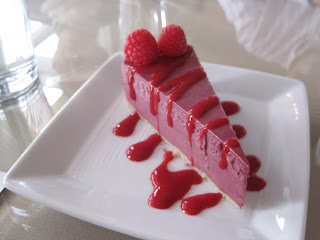 We followed up lunch with a delicious Raw Vegan Pomegranate Cheesecake.  It was truly as good as it looks. 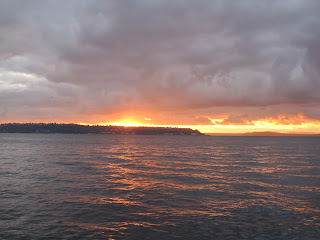 Shot of the Seattle sunset from the dock.  It was pretty gorgeous. 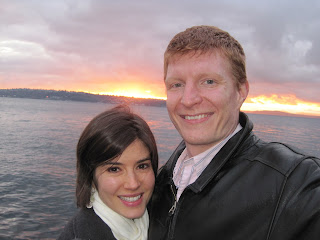 Thank goodness for William's long arms in order to snag our few and far between couples shots. :) 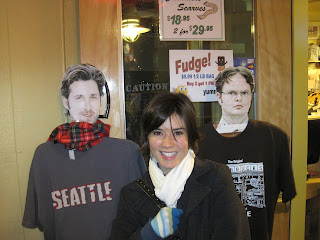 Me and my boys. ;-)  I have no idea why Patrick Dempsey and Rainn Wilson's heads were used with the shirts, but I had to snap a picture with them. :) 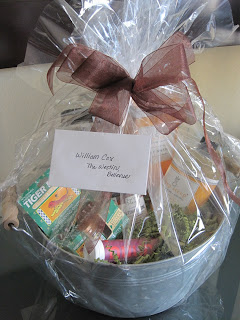 The amazing gift basket that was waiting for us in our fancy Westin hotel room.  Seriously, the room was so lovely.  I didn't even mind sleeping in a hotel bed, since it was so fancy. 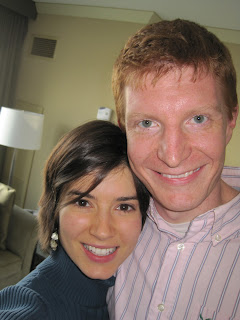 Aww, I feel like we're still young and cute!  Actually thanks to two new sweaters, and a coat and scarves borrowed from my sister, I felt young and cute and hip all weekend long. :) Nice to feel that way when normally I am just "mom".
Day 2 was started out with some delicious, engine revving smoothie! 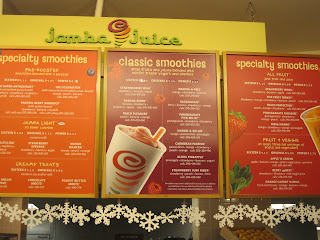 Can I mention that I love that Jamba Juice (as well as some other places), list out their calorie counts for menu items?  I'm not a huge calorie counter, but losing weight does eventually come down to basic calories in v. calories out, so yes, in the grand scheme of things I watch my calories, knowing that most of the time, if I'm fueling my body with healthy, whole foods, with lots of veggies, fruits, legumes and some grains and nuts, the calories all work themselves out and I end up generally consuming about what I need every day, no more.  That being said, I still love that they include their calories so I know what I'm putting in my body. 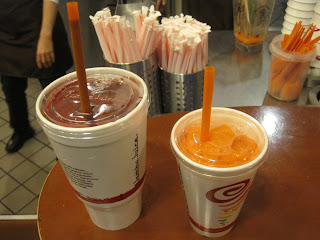 I had some fabulous berry/red veggie concoction with an energy boost and spirulina added!  It was delicious, sweet and yummy!  William had a carrot, apple, mango thing, which was still yummy though not as flavorful as mine. 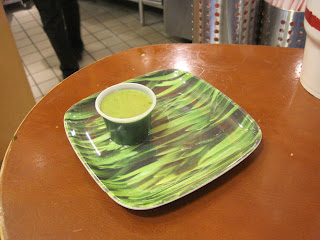 And yes, I had my first wheat grass shot!  I had never had it before, but I've heard about it (heard how unpalatable it is but how friggin' healthy it is), and I was so curious, that the sweet Jamba Juice lady comped William and I each a 1/2shot of wheat grass juice.  Bottoms up! 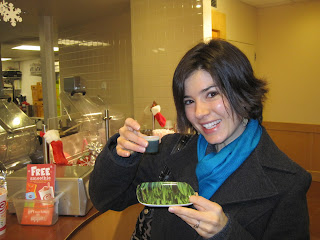 It was actually really quite palatable.  I don't know if it's cause I was steeling myself for the worst, or what, but it was actually pretty good.  It had a sweet, grassy, earthy taste.  It's no ice cream, but gosh, I'd seriously drink it every day.
Believe it or not, the next series of shots, meat-ish though they look, were all vegan entrees that were consumed buy us and one of the recruiters Stephanie and her husband Aaron, at a really cool place called the Plum Bistro. 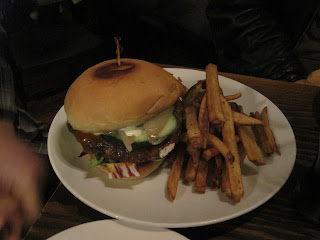 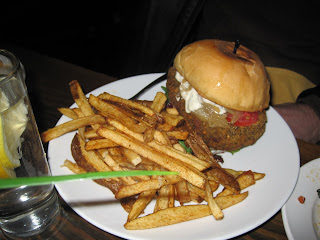 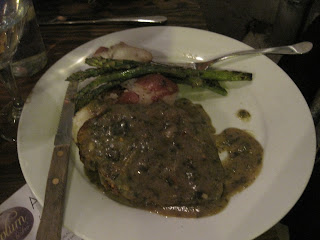 This was the amazing Vegan Mac 'n' Cheese that tasted almost identical to the regular stuff.  It had a little more herbed taste to it, which I really loved, but it is by far the closest vegan mac 'n' cheese I've tasted.  I could have had 3 apps of this. 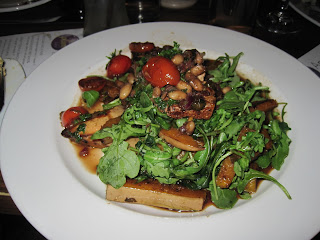 This was my dinner, and I think by far the best choice of the night.  Some tofu in balsamic and white bean sauce, with a bed of greens and sweet tomatoes.  Yum.  I don't normally eat a lot of tofu, but this was a tasty treat! :)  Missing at this meal was the roasted brussel sprout app and the smoked kale and tofu app.  They were both good - the kale really was amazing though. 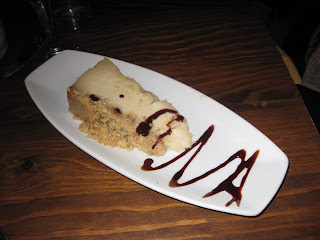 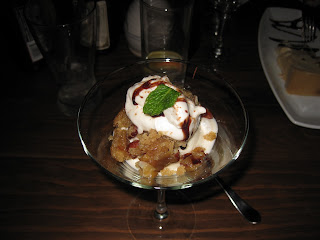 Vegan almond blondie with ice cream.
Yikes!  Long post.  To be continued in Part 2 post.
Posted by Baughface at 11:44 AM No comments:

I have about a billion and one other things that I would rather post about and that would be more enjoyable I think.  And yet when the stress and the business of life takes over, what do I post about?

1.  The coffee in my hand.  I don't normally drink morning coffee, except Sunday mornings.  I think this might become a staple in my life for the next 2 weeks.

2.  The utter exhaustion and stress I feel at the moment, prompting this cup of coffee.

3.  How much easier it is to clean out someone else's house and order people about, even if it does mean you stay up till midnight working.  Not to mention it's an incredible distraction from the more pressing issues at hand, like....

4.  The prospect of my husband finally nearing a "see-able" end in his PhD work, and the ramifications of that.

5.  Said ramifications include being offered a fantastic job position, with people he would love to work for, in an incredible work environment - ALL THE WAY ACROSS THE COUNTRY IN SEATTLE.

6. I can become an extra on GA if I live in Seattle right?

7.  How do you weigh the tangibles v. the intangibles?  They're intangible after all.

8.  The 6 hour red eye flight we are probably catching TOMORROW evening to fly out to Seattle and check things out.

9.  The sorrow we feel at even considering leaving family.  How do I tell Charlie he won't go to Grammy and Grandma's house every week anymore if we move?  (Enter the broken mama's heart.)

10.  The relief I find at knowing that God has us and our life in His hands, and we WILL be okay - even if I don't feel it all the time, or remember it all the time, or have a clear idea of what to do yet.  He orders our steps, for which I am eternally grateful, because if this decision were totally up to me, I would REALLY live in fear of botching up my life.

11.  The empty cup of coffee in my hand that I am contemplating refilling already.  Someone told me they unexpectedly became a coffee snob after moving to Seattle?  Would I exchange my dried-chickpea-over-canned snobbery in favor of coffee snobbery?
Posted by Baughface at 8:36 AM No comments: